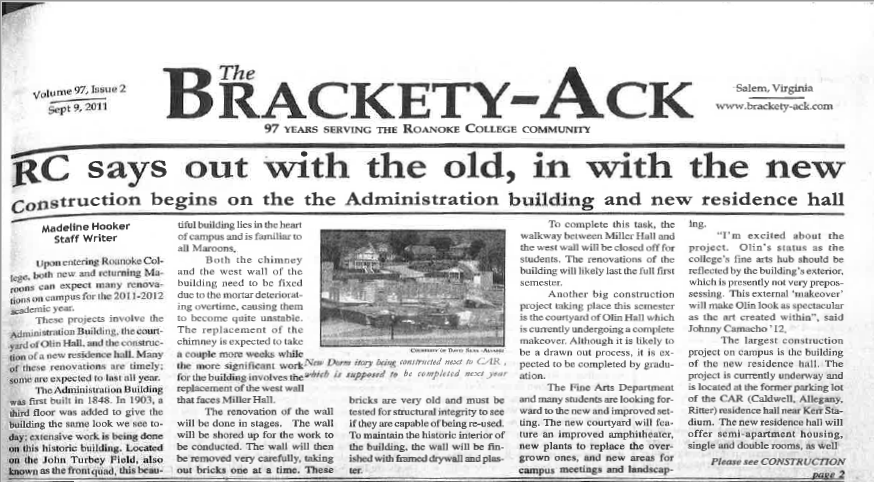 RC says out with the old, in with the new

Construction begins on the Administration building and new residence hall

Upon entering Roanoke College, both new and returning Maroons can expect many renovations on campus for the 2011-2012 academic year.

These projects involve the Administration Building, the courtyard of Olin Hall, and the construction of a new residence hall. Many of these renovations are timely; some are expected to last all year.

The Administration Building was first built in 1848. In 1903, a third floor was added to give the building the same look we see today; extensive work is being done on this historic building. Located on the John Turbey Field, also known as the front quad, this beautiful building lies in the heart of campus and is familiar to all Maroons.

The renovation of the wall will be done in stages. The wall will be shored up for the work to be constructed. The wall will then be removed very carefully, taking out bricks one at a time. These bricks are very old and must be tested for structural integrity to see if they are capable of being re-used. To maintain the historic interior of the building, the wall will be finished with framed drywall and plaster.

To complete the task, the walkway between Miller Hall and the west wall will be closed off for students. The renovations of the building will likely last the full first semester.

Another big construction project taking place this semester is the courtyard of Olin Hall which is currently undergoing a complete makeover. Although it is likely to be a drawn out process, it is expected to be completed by graduation.

The Fines Arts Department and many students are looking forward to the new and improved setting. The new courtyard will feature an improved amphitheater, new plants to replace the overgrown ones, and new areas for campus meetings and landscaping.

“I’m excited about the project. Olin’s status as the college’s fine arts hub should be reflected by the building’s exterior, which is presently not very prepossessing. This external ‘makeover’ will make Olin look as spectacular as the art created within”, said Johnny Camacho ’12.

“Our goal is to have more students living as residents on campus”, said Mark Noftsinger, Vice President of Business Affairs.

The construction and hard work is certainly paying off, as Roanoke College placed 18th on the list of the most beautiful campuses in America by the Princeton Review.